TBR's Wheelie Bar for the Maxx is the first on the market and will not only protect your car from cartwheels and rough landings but it will also give your car the ability to pull the best wheelies you can imagine!

This listing comes with the following for the Traxxas Maxx: I find it crazy there are no instructions with most of their parts. A lot of them are not self explanatory. Then when seeking help they only respond back when it’s convenient, if at all. I do think they have very high quality parts, but no instructions and bad customer service turns me off.

Best mod for your 6S Maxx!!

S
S.3.
Much wider than stock

Looks awesome, functions well as a wheelie bar. The plastic doesn’t give enough. Broke within the first week. Still waiting on replacement. Many unanswered emails. One would think with as much as I’ve purchased from them, outfitted 6 cars, gave plenty positive reviews on social media forms, that they would be a bit more responsive. Nope 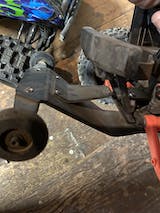