Protect your Arrma Granite Voltage with TBR's Defender Front Bumper! The latest in our front bumper line, offering ultimate protection and comes with our famous !

This listing comes with the following for Arrma Granite Voltage:

The Arrma Voltage doesn’t come with front or rear bumpers, so the T-bone front bumper and rear bumper/wheelie bar set is a must have if you want to upgrade and fully enjoy these cars without constantly breaking the front end. I have them on all three of my voltages. They typically don’t come with instructions but are extremely simple to install. And if you have issues there’s plenty on YouTube that’ll help guide you. I’m not thrilled with the hardware so I use longer, 12.9 steel hex screws.
I find that most RC parts don’t come with instructions and occasionally with poor hardware. So it’s good to have extra quality screws etc and learn to enjoy the challenge of figuring out how to install and make things work.

First, there are no instructions. This is pretty poor. Not even a paragraph to explain. Shouldn’t have to go through reviews to find a link to a YouTube video.

The hardware is the biggest issue here. They seem to have cheapened out. The video I found shows them using nice black hex screws. Now they have silver philips head machine screws. The thread pitch is very fine, which doesn’t match the original screws, but it seems to work OK so far. THE REAL problem and frustration here were the spacers. In the YouTube video, they had metal spacers that seemed to fit great. I received nylon spacers that seemed like they might work but definitely did not. Tried coaxing all kinds of ways. Ended up having to sand them significantly on two sides each before they would work. The outside diameter of the spacers needs to be smaller.

The mounting holes don’t match up perfectly. Probably will be OK, but it leaves tension on the piece. I’m no structural engineer, but I would assume that a piece that is meant to be hit might eventually crack. Maybe I’m wrong? It seems to be made of a flexible plastic that feels almost like plexiglass.

And not that big of a deal, but the blue doesn’t match the blue on the bodies. I only ordered it because it’s the only color left. I would recommend just discontinuing the color. It’s only getting ordered when there’s nothing else left. Again, I could be wrong here. It’s not bad, just didn’t want the body of my truck to be totally demolished in the several months until I can get a set in a better color.

I’m sure it works beautifully as a bumper, but I didn’t feel like driving it after dealing with this headache. People need to know about these issues. I hope you’ll resolve for the future.

Also, why not sell a two pack with the bumper and the wheelie bar? Most people will want both, and it’s hard to find them both in stock. Customer service is awesome and they helped me with this. Big kudos!

Look forward to loving this and forgetting installation woes.

Couldn’t be happier with this solid made T-Bone bumper for my Arrma truck, even looks way better with it on and will protect my future rc driving, this bumpers fly of the shelf’s soon as available so people don’t sleep on it, I got lucky I own one of this bumpers gonna buy this brand for sure for my other rc cars.

Got two to put on the Granite Voltage to give both ends protection for my boys as they learn how to drive their RC trucks. Needed to do a little modification to get the rear one to fit and add a small 3D printed adapter but it works and fits great and give the car the protection it needs for new drivers. 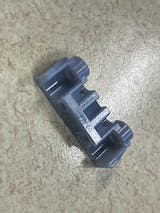 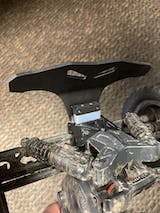 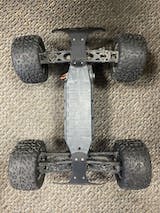