A custom job made just for your Baja Rey's Ford Raptor body.

TBR's Front XV4 bumper is designed for a scale look and will protect your Baja Rey from major impacts and is a an exceptional front skid.

This listing comes with the following for Losi Rock Rey: Except for when I'm paid to write reviews (NOTE: This is NOT one of those times), I'm not one to write reviews. The only times I tend to write them is when a product/service is incredibly good, or incredibly bad. In the case of the TBR XV4 Front Bumper, it is, most definitely, the former. I have not one, but two, of these bumpers. The first is the Rustler 4x4 version, while the second is the Baja Rey Raptor version.

I'm not going to call these "bulletproof"...but, they're about as "bulletproof" as RC front bumpers get. To give those reading this an example of what I mean, a couple of weeks ago, my step-dad & I were running our vehicles (he has a 2WD Slash) on a dry lake bed south-east of Las Vegas, south of the Hoover Dam. At one point, I hit a "clay rock" ( a mosty-dry, but still moist-enough, clump of clay) that was approximately 8" in diameter. When my Baja Rey hit it, the thing split in two. I must have been going at least 30mph, and I'll tell you...my truck slowed down so much from the impact, it almost stopped. This was not like one of those situations where you hit a dirt clod, it breaks into dozens of pieces, and the vehicle maintains speed throughout...this was closer to hitting a brick wall, albeit, a "movable" wall.

I was sure I had damaged the front end, so I drove it over to me, and inspected it. To my surprise, there was NO damage...not even a scratch. The TBR XV4 completely protected my Baja Rey from damage. Enough said...now, add one to your cart, pay for it, and get it installed as quickly as you can once it's delivered. When I finally get around to building up my Slash 4x4, I KNOW it will be getting the XV4 treatment.

My son and I have 2 Raptor Baja Rey's and bash and race at local city parks. After a few epic crashes into fences and baseball dugouts on his part, I went looking for some extra protection.

I've been completely happy with the bumpers we got.

Design-From an aesthetic standpoint I think they look great. Buying the Raptor version of the Baja Rey really is a design preference over the less expensive standard BR. So, if you are crazy about the Raptor styling not being "interrupted" by an exterior bumper then this is not for you. I REALLY like the look of the Raptor body and was a little concerned about messing up the lines. But...I think this thing looks so dialed in and badass in its own way I like what it adds to the truck.

Quality- The two I got were just right, no issues. Everything T-Bone provided went together well.

Price-Compared to some R/C product prices out there I think this is fair and a great value.

Overall-Great. I love the looks and saving my front end when things go sideways. Makes the Raptor look even better.

Had I had this installed a few weeks earlier l may have saved some serious dings on my body panels. The bumper looks good and does it's job!

Bumper works well and offers great protection, however I can’t get over the aesthetics. To me it looks awkward having the larger tube above the shorter one. Buy it for protection, but to me it just seems backwards.

Overall the bumper is great, extremely sturdy. However it arrived unfinished, it was missing two holes that the original front cage bolt into, I had to jerry rig it a little to work. That being said I'm still happy with the purchase. 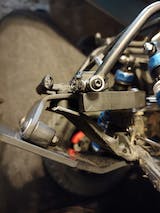